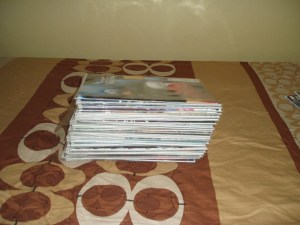 The craze started actually when i was a little boy but at that time they aren’t much source to get the U.S comic books and thing that make it worse is the sky-rocket pricing as most of these comic were directly import from the distributor oversea whereby they don’t appoint a company to distribute it here in Malaysia. Maybe the market it not there at that time.

As i grew up, i still enthusiast to U.S comic books as not so long time ago, there were this company from Singapore called Gotham Comics (at first i thought it was a subsidiary of DC comics ahah…but sadly it was not).

Collection as to-date
To continue my enthusiasm and love towards comic books, after i have a job, this is the time where I earn my cold-hard cash to start my collections as I’ve started to bought my 1st Direct Issue which is Captain America #600.

As my collection grow bigger and i was thinking that it was tiring and waste of time for me to go to the nearest LCS (term for Local Comic Shop) every weekends just to get the update on what is up. So, as i read a column in a forum that this forumer advises that to pre-order the comic as not only it safe most of the time but also it give me the privilege to track my comic.

Upper left to bottom right: The New Avengers, Dark Avengers,
Uncanny X-Men Firts Class and Ultimate Spiderman
As for now, instead of going to The Mind Shop (to buy variant cover of the comic),also I usually went to Comics Mart @ Mid Valley Megamall (+603-2287 0626) to subscribe my favourite Direct Issues. As I’m satisfied with their service after my first 3 visit there, I then decided to continue my stock-up of comic books from them thus be one of their regulars. I would recommend to those comic books lovers and also board games (not the usual type) to visit this shop.

Upper left to bottom right: Image United (beneath The New Avenger Initiatives),
Astonishing X-Men, The Amazing Spider-Man and Nation-X
As the price of most comic books for 2009 and 2010 has increased from 2008 where I need to plan my financial as most of the comic books will cost me from USD 2.99 (RM 14) to USD 4.99 (RM16). Thus, I will do my research first and review whenever I want to opt for any new title. As for caring my collection of comic books, I always asked my LCS to supply me with the acid-free boards and poly-bag with self-adhesive to protect the quality of ink of the comic books from the exposure of moisture and excessive heat that could effect its value in the future. Nonetheless, I has a plan to buy the Mylar-bags and some comic books caring kits from the U.S soon.

Some of the latest issues that are still kept unseal

7 years in the waiting, SIEGE from Marvel (Limited Issue)
In the year 2010 and years to come, I will continue to collect the comic books as a hobby and as a enthusiast, as such I’ve a plan to start collecting rare type of comic as at that time found an X-Men issue that priced at RM 3++ and bough 1st Variant issue that he cover is by Joe Quesada, Editor-in-Chief of Marvel for Cap: Reborn #1 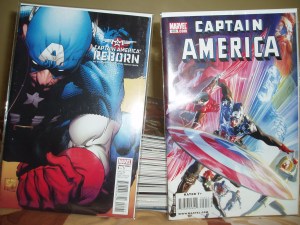 Cover by Joe Quesada (left), Alex Ross (right)
Maybe you can share your comments and experience of collectiong comic books to a beginner like me ait.